(Bloomberg) –Denmark, the European Union’s biggest oil producer, will stop offering new licenses in the North Sea and phase out production altogether in 2050 as it takes an historic step toward a fossil-fuel free future. 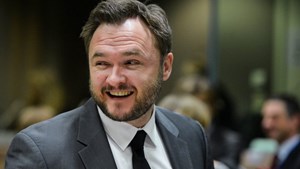 told reporters in Copenhagen that he expects the decision to “resonate around the world.”

The Social Democrat government reached an agreement with a majority in the parliament late on Thursday. The deal means a planned 8th licensing round will be abandoned, as will all future exploration, Jorgensen said. About 150 million barrels of oil and equivalents that would have been drilled by 2050 will remain beneath the ocean’s surface.

“We hope this can inspire others,” Jorgensen said in a phone interview on Friday. “We’re the first country with a meaningful production to take such a step. The idea is that others will look at us and say, ‘if Denmark can do it, so can we.”’

For oil and gas companies currently operating in Danish waters, terms and conditions will remain unchanged until production stops in 2050. The decision will cost Denmark about 13 billion kroner ($2.1 billion), according to estimates by the energy ministry.

Denmark’s decision was cheered by environmentalists. “This is what climate leadership looks like,” said Mel Evans, senior climate campaigner for Greenpeace in the U.K. He said he hoped the U.K. would “take note.”

“To recover from this pandemic and to future-proof our economy, we must transform the North Sea into a renewables-only energy industry that creates jobs for workers and powers the U.K. with clean, affordable energy,” Evans said.

Denmark’s history in the North Sea goes back about six decades. The government at the time gave A.P. Moller-Maersk A/S exclusive exploration and drilling rights, which the company then shared with a handful of oil majors including Royal Dutch Shell Plc and Chevron Corp.

In 2017, Maersk agreed to sell its oil and gas business to Total SE, and the Danish company — the world’s biggest freight carrier — now focuses on transport.

For Denmark, the decision to end its North Sea exploration fits into an agenda that has made protecting the climate a priority. The country targets cutting carbon emissions by 70% in 2030, compared with 1990 levels.

Jorgensen pointed to Europe’s desire to be carbon neutral by 2050, “which means it needs to end its reliance on fossil fuels.”

“It’s my clear impression that this development will speed up,” he said.

4/28/2021 In an unprecedented year for the oil and gas industry, oil production declined by 8% in 2020, while global gas flaring reduced by 5%, according to satellite data compiled by […]

By Jennifer A. Dlouhy and Robert Tuttle on 6/13/2021 Keystone XL pipeline, during the construction phase WASHINGTON and CALGARY (Bloomberg) – Environmentalists emboldened by this week’s defeat of Keystone […]