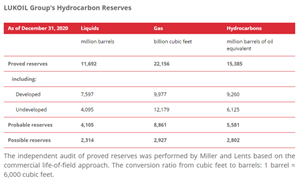 Russia’s Lukoil announced the results of reserves assessment and independent audits as of December 31, 2020. According to the SEC classification, the company’s proved hydrocarbon reserves totaled 15.4 billion barrels of oil equivalent, 76% of which is comprised of liquids.

As a result of geological exploration and production drilling conducted in 2020, Lukoil added 464 million barrels of oil equivalent to its proved reserves. The largest contribution was made by the assets in West Siberia, Ural region, Timan-Pechora and Russian sector of the Caspian Sea.

Optimization of development systems and wellwork programs at existing fields, as well as conversion of contingent resources to reserves added 258 million barrels of oil equivalent to proved reserves.

The reserves dynamics was negatively affected by a 34% decrease in annual average oil price used for reserves estimate.

Exxon rebounds to first profit since 2019 on crude surge