Abuja/Lagos – The Nigerian National Petroleum Corporation, NNPC, says it has spent N987 billion so far on the rehabilitation of its four refineries in Warri, Kaduna and Port Harcourt as well as on repairs of pipelines and the search for oil, among others.

The NNPC put money spent on pipelines repairs within the space of five years, including money lost as a result of product loss, at N966 billion.

According to the corporation, N71.17 billion was spent from January 2020 to January 2021 and N21.47 billion spent in January 2021 alone on the rehabilitation of the country’s moribund refineries, the Nigeria-Morocco gas pipeline, and oil search in the frontier basins.

The National Petroleum Investment Management Service, NAPIMS – the investment management arm of the NNPC – disclosed these in a report on its spendings, during its February 2020 presentation to the Federation Account Allocation Committee, FAAC.

NAPIMS’ parent company, the NNPC had revealed in an earlier report that it spent a sum of N49.7 billion on pipeline repairs in 10 months – January to October 2020.

NNPC said it recorded a total of 363 vandalised points in its pipeline systems during the period, necessitating the expenditure.

Although it spent N1.80 billion in July; N1.49 billion in August; and N4.41 billion in October, no repairs and management cost was incurred in September.

It said 23 pipeline points were vandalised in October, representing about 10 per cent increase from the 21 points recorded in September.

“Products theft and vandalism have continued to destroy value and put NNPC at disadvantaged competitive position,” the NNPC said.

The corporation’s pipelines have over the years suffered spates of vandalism which alongside lack of maintenance, and poor management have left the assets under-performing.

As a result, many of the depots and pipelines have remained idle for years.

In a related development, the NNPC put money spent on pipeline repairs within the space of five years, including money lost as a result of product loss, at N966 billion.

The explanation came in response to the query raised in the 2016 report of the Auditor General of the Federation, AuGF, currently being scrutinised by the Senate Public Account Committee, led by its chairman, Senator Mathew Urhoghide.

According to the corporation, the N966 billion expenses and losses were calculated to be between 2010 and 2015. 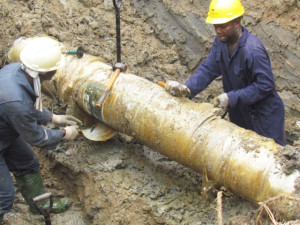 *Technicians carrying out repair work on a vandalised pipeline.

The Senate panel had insisted on probing the NNPC on an alleged failure to remit N4 trillion into the federation account as contained in the AuGF report.

“The total revenue unremitted as at 1st January 2016 from amounts payable into the Federation Account by NNPC was ₦3.88 trillion.

However, the NNPC, in a written response, said “the unremitted N4 trillion was arrived at without taking cognisance of the subsidy and pipeline repairs and management associated with domestic crude oil transaction”.

The corporation added: “Aside the above, pipeline repairs and products losses so incurred stood at N966 billion for the same period.”

Also during the February 2020 presentation to the Federation Account Allocation Committee, FAAC, NNPC told the committee that it has increased its total cash call arrears repayment to its Joint Venture, JV, partners by 0.42 per cent to N3.094 billion as at November 2020, compared to N3.081 billion as at October 2020.

In the presentation to member of the FAAC, the NNPC did not provide reports of payment for December 2020 and January 2021.