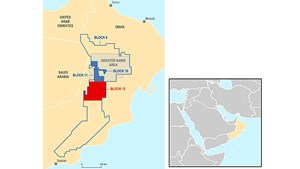 A new government-owned energy company has been created by Oman as it seeks to use its largest oil block to raise debt.

The firm, to be called Energy Development Oman, will own a shareholding in Petroleum Development Oman LLC as well as an interest in Block 6, according to a government gazette on Sunday. The company will “undertake hydrocarbon exploration and production operations” and can borrow money “in any manner,” according to the gazette.

Energy Development Oman will also be able to invest abroad and deal in renewable-energy products.

Bloomberg reported last month that Oman, which is struggling to finance a soaring budget deficit, planned to transfer its 60% stake in Block 6 from Petroleum Development Oman to a new company, which would try to issue around $3 billion of bonds in the first half of 2021. JPMorgan Chase & Co. is advising the government on the plan, according to a person familiar with the matter.

Block 6 is one of the biggest crude deposits in the Middle East, with production capacity of 650,000 barrels a day. Royal Dutch Shell Plc holds 34% of the block, while Total SE owns 4% and Partex Oil & Gas 2%.

Oman’s proposal could set a precedent for other governments in the Middle East that want to raise cash without stretching their balance sheets. Iraq’s Kurdish region sells some crude before it’s pumped under so-called pre-payment finance deals, and the United Arab Emirates has raised billions of dollars this year by selling rights to lease pipelines and properties. But no Middle Eastern government is known to have used specific oil blocks effectively as collateral for funding.

The structure for Oman would probably be similar to the reserves-based lending facilities that are common among U.S. shale producers.

By Kurt Abraham, Editor-in-Chief on 1/29/2021 Texas Alliance Executive V.P. and Petroleum Economist Karr Ingham The Texas upstream oil and gas economy suffered a 30% decline in 2020, according […]