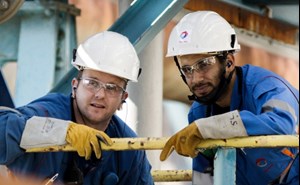 The Uganda project is just one of many Total operations in sub-Saharan Africa.

(Bloomberg) –Total SE’s likely decision to proceed with a $5.1 billion Ugandan oil project will extend its dominance as the biggest spender in sub-Saharan Africa.

The French energy giant, poised to greenlight the plan within days, has been the largest investor in the region since 2012. Its spending on exploration and production there peaked at $6.2 billion eight years ago, and even following the latest downturn will be around $1.9 billion in 2021, Wood Mackenzie Ltd. data show. That’s more than double any other international producer.

The final investment decision on a key pipeline — expected Sunday — will see Total tap more than a billion barrels of crude from Uganda and ship it across East Africa to the coast. A decision on the development of the oil fields feeding the pipe is likely at the same time, according to a person familiar with the matter. A spokeswoman for Total declined to comment.

The landlocked country plans to start pumping crude in 2024. That will keep Total out in front over the next few years. In sub-Saharan Africa, the company is projected to spend almost twice as much as Exxon Mobil Corp. and Eni SpA through 2025, according to Rystad Energy A/S analyst Parul Chopra. When North Africa is included, Total and Eni are seen neck-and-neck.

The Ugandan venture isn’t the only African project coming to fruition for Total. Its giant liquefied natural gas project in Mozambique is targeted for completion in 2024, though workers were evacuated from the construction site last month amid security threats from an escalating insurgency.

Total also has projects planned in Angola and Nigeria over the next few years, following which “spending would start to relax,” said Adam Pollard, a senior analyst at WoodMac.

U.S. shale patch gets back to work as unfinished well inventory falls