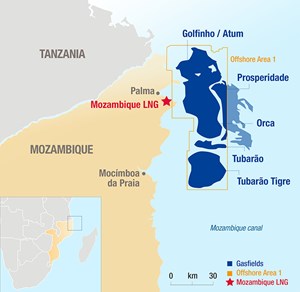 Fighters linked to Islamic State raided a town less than 5 kilometers (3 miles) from the construction camp this week of what is Africa’s largest private investment, ratcheting up risks for the planned LNG export terminal on Mozambique’s northern coastline. While the heavily guarded site hasn’t been attacked yet, militants have made threats that they may do so.

Total “has temporarily reduced its workforce on site in response to the prevailing environment,” the company said in an emailed response to questions on Friday. The situation is being reviewed continuously, it said.

The southern African nation has so far struggled to contain an insurgency in the Cabo Delgado province that began in October 2017 and that’s killed about 2,500 people while prompting 570,000 to flee their homes.

Mozambique is hoping that LNG projects such as Total’s will transform one of the world’s poorest countries and catapult it to being a major global exporter of the fuel.

The coronavirus pandemic has further weighed on the decision to reduce personnel, Total said.

The Mozambique LNG project, set to start production in 2024, was the site of the country’s first coronavirus cases in April, which led to works being suspended until June. There was a new outbreak detected at the project last month, Maputo-based news website @Verdade reported.